Submissions (and payment) must be received  Extended to 5:00pm for the stragglers, February 13th for consideration.

Payment of $10 can be submitted to Ted Riolo by either Venmo (QR code below) or Apple Pay (Ted’s cell number) before the deadline. One entry per person, but several members of the same household can play as well.

Each correct answer is worth between 1-3 points (listed with each question) for a combined total score of 100 points. The final question will be used only to break a tie where the answer closest (higher or lower) to the final combined score of the Super Bowl will win. If still tied, the player who submitted their entry first will win.

Payout is as follows:

Payouts will be sent to winners in the same form as the pay in.

To keep the game exciting for everyone until the very end, I’ve changed the winner designations. First prize goes to the best score, that’s a given. Third prize goes to the lowest score because it’s just as difficult to get the lowest score as the highest. The second prize will be awarded to someone in the middle. This way everyone has something to hope for throughout the game. If you’re doing well, you want to keep doing well. If you’re bombing, then just hope for it to get worse. And if you’re in the middle, you are rooting for a scoring play from around the yard line you’re currently sitting. It’s more likely to be a low number, which favors the better scores, but this years playoff has shown that a long field goal is always in play. The second prize will not go to 1st or last place, in that event it will move up/back one spot to ensure there are 3 different winners. *Score from scrimmage, this would exclude a PAT or 2-Point conversion.

When paying with Venmo please make sure to NOT select that you are paying for a service. This generates a few that is lost to Venmo and will require another small transaction to send the full payment. 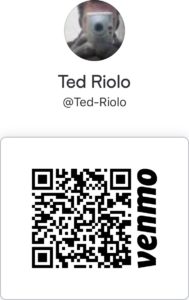